The Bottom Billion - High on Analysis, Low on Solutions

Paul Collier's book had come highly recommended; hence I shelved other interesting books on my list for his book. The bottom billion focuses on the critical elements that make the poorest countries (mostly in Africa, or called Africa +)  in the world, really poor. The onion was not identifying the problems, which most authors do very well. It was Paul's ability to back up the reasons with data that makes this book special. 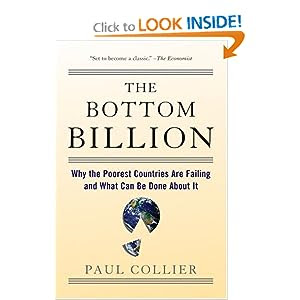 Working both as a World Bank researcher, and Oxford professor: his access to a wealth of data came in handy in making both objective and subjective extrapolations that formed the nucleus of the book. Some interesting anecdotes like "Natural Resources make a poor country more prone to civil war, while Aid makes them more prone to military coups" makes for an  insightful read.


His thesis surrounds the theory of traps. That poor countries are caught in one or more traps at any given point, which by virtue of their existence is either intrinsic or endemic. He suggests external pressure to break off these traps..or rather external action (more on why that is unlikely to happen). The traps he constructed were those of being landlocked, conflict trap, natural resource trap and bad governance in a small country. But even these traps are perfunctory to insiders. In the end, the only trap that exists is a uneducated (or mis-educated) citizenry governed by bad leaders! Basically- top-down decay!


Paul's preferred solutions as usual (like Dambisa Moyo's) assumes the best intentions of Western governments. Asking others to help the bottom billion..good luck with that. The book is high on what the electorate, institutions and government of the West can do for the bottom billion but low on what citizens of the bottom billion can do for themselves. In many cases, it gave up on the people. Assuming for example that being landlocked is a dead end by saying "that is the way it already is; there is nothing we can do about that". How about merging with other nations to forming "super-countries" under federated jurisdiction that can survive and stop depending on Western Aid? Paul put the real solution away from the problem by assuming it is fait accompli.


I figure if this were such a problem (as clearly it is), most Western countries can actually stop aid to landlocked nations and condition resumption on amalgamation to sensible political units where the rights of the constituent countries to self governance is respected. The cost of multiple institutions, security and borders to tiny African nations is so high it makes no sense that the aid industry is not pushing for such radical solutions yet. Well, not until you realize it is easier to push tiny nations around in the General Assembly of the UN than big ones. So guess what? The West like your tiny countries that depend on them. Call it the aid paradox. The donors like to give, to keep the receivers where they are.


Some of Paul's recommendation about having charters, and laws as far I can tell are merely academic and does not pass practical muster. Providing support to dissidents and reformists in countries like Tunisia and Egypt work better than deploying troops. And by the way, Paul was wrong about British intervention in Sierra Leone. That was the work of Nigeria's Army...the British only came to take the glory after the hard work was done. So it is hardly a model for military intervention. He should have also talked to ECOMOG and UNASMIL on the true cost of that misadventure.

In the end, the poorest countries of the world mostly in Africa can do better for themselves by:


The West, their corporations & their citizens of the big rich countries can:
I came away after reading this book (and promising myself not to pick up Paul Sach's book or that of William Easterly..similar types) convinced that Africans are the only ones that can truly solve their own problems. Of course outside support is welcome, but in the end- we must be tired of being poor and push for a better Africa. Truly:

"When Africa's Problems are analyzed in a book from the point of view of an all powerful Western Interventionist, from the point of view of what western readers can do for the basket case called Africa, rather than what Africans can do for themselves: then it is always nearly the case that the author gets the problem analysis right (they all do), but fail miserably in prescribing the right solutions."

That was yours sincerely...
Posted by DonCasiragi at 6:45 PM