Heaven forbid if you try to help Wall Street- according to Paul Krugman and his other Liberal Economic soul brothers, this is the time to permanently roast and kill capital markets, that evil they both have been seeking to sink for time immemorial. For Krugman and Gibralth the UT Economist... it is all about point scoring. (Note: Krugman never warmed to Obama as an early Hillary guy, and Gibralth lost to Golsbee during the primary as the economic brain trust of the Obama inner circle) . Having been out of the sphere of influence, they can't believe Obama is departing from the liberal orthodoxy of spending and spending to revert recession- but is doing a blend of spending and free market economics. To krugman, seeing Wall street pay will be a dream come true- but to Obama and the country, that could be an expensive proposition.
1. Krugman's Point? That the private sector bad guys are putting too little skin in the game...7% versus government direct 7% plus another 86% insured by FDIC which is indirect government loan. He believes the private guys can walk away from the loan if things goes aweful, and will make a killing if things go great.
Krugman misses the point. If things go aweful, does he really think these big private equity guys with billions on the line will just walk away? True the government puts up a chunk, but the alternative was to force the banks into bankruptcy in which case the government is left with 100% of the bad assets as well as a Lehman proportion crisis that will lead to loss of the progress already made. Or the conservative alternative of doing nothing? Really? What this partnership guarantees is two things: good faith and right pricing. The timing is right, most of these assets are evidently undervalued because of fear, and they are probably at their worst performing state given the state of the real estate market, and job crisis and have only one way to go- UP. But government still is in no position to price these securities due to legal and self interest problems. On whose interest would government price? Taxpayers? Banks whose health the economy depends? Companies whose taxes sustain the government too? Well now, the private investors have a skin in the game and will ensure to get the most optimum price possible guaranteeing that no overpayment occurs: and I doubt any of them will plan to walk away upfront (destroying a good reputation and future profit ) by paying too much for the assets anyway (I know Krugman generally Assumes the worst of capitalist- but c'mon!). If they make money, tax payers also make money. May be not as much as they would if the tax payers were in it alone- but that is without discounting that taxpayers would have overpaid doing it alone tightening the room for supposed profit anyway, while leaving them with huge risk of defaults. I know Krugman is a fan of the Swedish model, but the Swedes have a tiny banking system. If Citi folds today, the FDIC will most definitely go belly up and the systemic risk is unpredictable.

In any case, if the banks do well, the taxpayer also will be doing well, since we well own most of the banks now: 40% of citi, and quite a chunk of others. It is high time Paul considers that each time he speaks nationalization, the banks are already partially owned by us anyway- and we will be wiping ourselves out if we wipe them clean.

2. Henry Blodget entire point about credit and how overborrowing brought us to this point,and why restoring credit should not be Obama's focus misses the point of affordable credit versus unaffordable one. The bunch of borrowers out there are good ones (85% to be precise- people still pay their mortgage), that can afford it if things stabilize. The way to restore a savings culture is not to kill the financial system with a shock treatment of destroying the credit system that will in turn kill the economy and jobs which will make savings impossible. As soon as credit flows, if the administration focuses on wage growth for middle class, the imbalance of the past will self-correct.

3. Galbraith's argument we all know- it is classic Keynesian, his idea that this problem can just be wished away by FDIC take overs which will leave taxpayers with the worst of both worlds: an expensive plan and a huge risk is untenable. While I know this classical liberal economists only seeming solution is government and more government, I am glad Obama is listening to the right voices and have not brought himself and Krugman who are as ideological as the Bush rightists that were there previously and would have screwed up as much as those guys. This is the time for cool headed decision making not for scoring ideological points and Obama should stick to the center guided by Volker, Summers and Geithner- Golsbee is one heck of a smart guy..saw him on Hardball.

On one count I agree with Galbraith, there is a need for prosecution of bad bankers that created the mess, and I don't think Wall Street think for a second that AG Holder will not start poking around as soon as this dust settles. If Holder doesn't, Cuomo will..but Obama is smart to start fixing before prosecuting. There is enough time to go after the bad guys that rode us into the ditch, but to do so we need to get out of the ditch first. I personally was against the idea of government willy-nilly buying the toxic assets..and call it cash for thrash on this blog. But I think Geithner plan is distinct from Paulson's in both timing (time has peeled off substantial value off these assets and now is a good time to get in on them) and element (it forces self interested private investors to price assets instead of Paulson's escapade that was an handout in disguise to his buddies on Wall Street).

In conclusion, Gibralth and his Liberal Friend Krugman should hold their peace. They are beginning to sound like Hoover's economists. The choice as Barack said on 60 mins is between bad and worse- and I am glad he has chosen bad: inasmuch as the liberal wing of the Dem will like to see their arch wall street enemies pay with sweat and blood, Barack is in office to govern with prudence and wisdom not kowtow to some wignut agenda. Why cut your nose to spite your face?
Posted by DonCasiragi at 8:58 PM No comments: 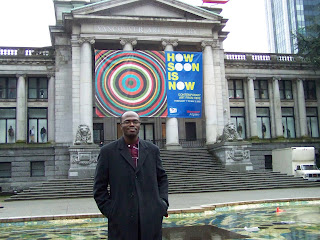 Monday 16th : Midnight Arrival. The immigration folks thought I am staying too short to warrant a second check. Oh well, get me to the hotel. The taxi drive not bad- got some money from the scotia ATM. The hotel is nice, right at Nelson & Granville..said to be the club strip alongside Yale and Gastown districts downtown. The hotel room is plush...quite cozy

Tuesday 17th: Got up early to visit the Consulate. A little disappointing with turn of events. Got it under control- praying it all works out. Hosted friends in my room. Took to bed early. Did some reading..finished off "Who took my cheese". Did I mention breakfast was great? Pack of drunks on the street high on Green beer...the breakfast room is also an Irish pub: befitting for St. Patricks Day. Thank God you left. Thanks!

Wednesday 18th: Breakfast was short. Got the package! Thank goodness..thanks guys- my hommies: y'all came thru. Thinking about doing Reggae tonight- has stuff on my mind. Started reading Are We Rome? Book deserves a review piece..I might do it. Did some law briefing..umm..productive..went to bed instead of heading out. Oh well, there is tomorrow. Enjoyed Dinner at the Thai Place. Asians have taken over in Van...its a good thing for the economy here I think. Which recession?

Thursday 19th: Early bird. Sorted things out- thank goodness it all worked out well. Breakfast was cool. Got back to chat with friends, and finalize club details. Was at adjoining Starbucks for Vanilla Latte..whateva. Bought some memorabilia. Head out on Red Bus for tour of downtown...nice architecture. China town was a marvel..the steam clock. Nyce! Stopped over at Pacific Mall & Gallery of Art. The best Contemporary Art Gallery in the world I think. Took my turn on a turntable. Spent 45 mins enjoying vintage music. The collection here is a must see..Nice place. Will head out tonight. Update tmrw. Need to finish one law brief b4 I head out.

Friday, 20th: Last full day in Vancouver. My flight is early tmrw. Wrapped up stuff on these briefs today..headed out beyond the arts district to the Marina. Its beautiful out here. Stanley Park and back. After finishing off a wrap of Sharwamam, its time to lay wait for the night. Boss downtown on Pacific is the perfect ending to a wonderful week. O Canada!

Posted by DonCasiragi at 8:12 PM No comments: