"Politinuts": Convo with an Associate 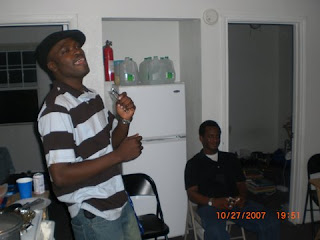 You see, I just realized fifty percent of my emails, instant messages and even texts are political conversation. I think I am nuts. It is more of an addiction...it runs in the family. You see even my Paps- my dad that is- will call me from Naija to waste his hard earned credit just to discuss one political matter- Nigerian or international. Even politics extend to my bedroom too- ol boy get ur mind out of the gutter ojare. Oh well, one of my political buddies had some thought to share this morning, I thought was interesting. It is related to the current US presidential elections and the Bakassi issue in Naija. Below is the convo verbitim with my response. All the peep toms, please enjoy- MY PASSWORD IS NOT INCLUDED. LOL

From the Debate last night, I think Rudy Giuliani doesn't have a chance of becoming the Republican candidate.Because when asked about the issue of Bible if he believed in it , he said he doesn't believe in everything in the Bible.That i think make me think if he ever win the Republican candidate there will be a third candidates or the Evangelical will not vote for him which will make any candidate that Democrat Present to win except Barrack Obama.
I think If Obama run against any Republican candidates except Thompson, he will loose.Because he doesn't look like a president, no experience and he is Black.the only way Democrat will loose the next election i think is to file Obama as their Candidate.
As for Romney, I think he has a better chance to be the Republican Candidate and if Clinton loose the Dem candidacy, i think Edward will win it .

As for Nigeria, I see us going to war with Cameroon over Bakkasi, because the Senate and lower House will never give Nigerian land as a " Gift" to Cameroon.so for the First time, Nigerian will have the opportunity to witness Nigeria, using all the military weapon we have being buying for years in war and we will earn a respect from other African nation.I think we should go to war with Cameroon if they want to fight us over our land.

I like this part: "the only way Democrat will loose the next election i think is to file Obama as their Candidate". LOL. I will add Hillary. If you look at all the match ups of Hillary with Republicans..she is always struggling in the national polls and more importantly in the electoral college tally. Sum it up- Biden and Edwards present the best chance for democrats.

As for Republicans, I have always been a Romney fan and he is less inconsistent than Rudy- who have divorced twice and is very well hated by a lot of people- minorities included during his tenure. His backing of everything Bush incuding an unpopular war will make him a ready target for the democrats. Even Thompson is divorced and that too wont bode well for the man who looks presidential but hardly acts like one. Mitt looks like a shoe in for the republicans, even though he will be trounced by every democrat except Kucinich, Hillary and Obama regardless.

All said, I think a Biden-Obama or a Edwards-Obama ticket is a winner. It will be historic nonetheless to have a black VeePee. Hillary will stumble I predict.

SUMMARY
The value voters are the net losers . This is simple- the value of their judgement is questionable since their Candidate George Bush messed up this country so much in the past 8 years. The top three candidates in both parties are either mildly value public officers or are plain sinners (as if the vale voters are not the number one hypocrites in town). In any case, Hillary, Obama, Edward, Guiliani, Romney and McCain- none is palatable to the ears of the rednecks that work with me. I thought of putting the picture of those 8 rednecks on the GOP stage last night up, but I think I am much more handsome and diversified than those clown lot. Ban the IRS! OMG. So there you have me

P.S: I think the TV shows- the office is so hilarious. You got link? Hook up that is
Posted by DonCasiragi at 10:18 AM No comments: