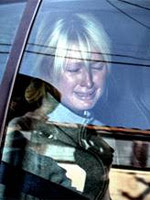 Okay, now you can call me disingenuous but I do think the recent uproar over the preferential treatment given Paris Hilton should be a reasonable ground for proponents of estate tax to tax inheritances to escalate the national debate on this. This "slut of a whiny" (apologies to Jim Cramer who used those exact words on her) is a poster child on why mega-billions waiting to be passed to heirs and heiresses is such a bad idea.

Put aside the failure of the judicial system of God's own country to be fair and consistent, the overall picture you will get is a young lady whose only public claim to fame is a raunchy porn movie to which her parent were purported signatory after it leaked (thank the so called Enabler i.e. her mum) and a penchant to appeal to the dead beat cameras of the paparazzi & the country's adulation of low achievers like George W. Bush and herself. This young woman has never held a day job in her life, but is somehow expected someday to control Billions of the Hilton empire. If that is not good enough, the risk she will use this money to peddle smut rises by the day; I mean the more often you forget your underwear in the house, the more I believe you really want to advertise your anorexic goods- herself and Brittany that is. This girl is famous for nothing. She has no talent (even the smut video sucked- can u imagine?), except to be notorious.
The recent incident of her purported early release from jail simply because she was too sick just exposes the uneven judicial system in this country where justice has always been reserved for those with the right amount of money and the right color. This is a girl who was pulled over twice for DUI, caught driving under suspended licence twice yet did not see the big house on each of those occasions. Let ordinary Joe try the same thing- in fact it is a sure one strike and you are out. Yet somehow, the cops pulled her over, only wrote a ticket and allowed the luxury of Lawyer instead of a bails bond man! If that is not enough, even after being caught in violation and being placed on probation and then violating that all our "heiress" gets is an automatic 27 days of credit for good behaviour in advance. Gosh! This stinks to high heavens. Who gets good behaviour credits in advance from inner city jails? I mean which black man?
Now our own new age Jenna Jameson, gets to go to the big house and was released five days into her sentence because she was crying too much. Bla Bla bla bla! The Sheriff need to be fired! This was one favoritism taken too far it made no sense. Sick. But in any case, I personally think this smut pusher do not need those millions she is waiting in the wings to collect- it should go to a trust to pay for insurance for the uninsured children of America. If she wants the money, she should go spend one more night in Paris and make more movies! In any case I hope she enjoys her remaining time in jail now that she has been sent back. Geeeeeeeeez!
Posted by DonCasiragi at 9:38 AM No comments: