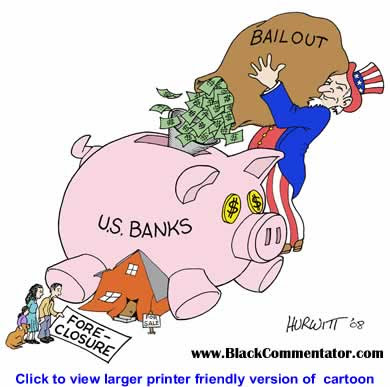 I came out of the gate swinging at September ending that the "cash for thrash plan" by Paulson was doomed to fail; guess what, it is an utter failure! After tweaking the plan i.e. putting a lipstick on a pig, and then changing course to ape Britain's own more successful nationalization program, without going as for as Britain for obvious ideological reasons- Paulson finally had to show his hands and bail out Citigroup even after that "too big to fail bank" got its share of the kitty theh first time go around. This bail out fiasco is even getting ridiculous, with the Feds having spent 250 billion on banks, with no recovery in site, and with some even stil paying dividends, and lining up bonus for the same CEOs that damaged them e.g. Wachovia! Of course, even by Paulson's own admission yesterday, credit dried up in October and the 250 billion is not even making them lend. The bail outs to AIG and hand outs to the merger deals JPM and WAMU, or JPM and Bear Stearns is beginning to make this look like a bottomless pit. At Bloomberg's last count this bail out might cost tax payers $7.4 trillion!
Of course instead of fezing up and outrightly nationalizing these banks, the Federal reserve is doing just that by nationalizing their assets through the back door by buying $500bn directly, or socializing their risk by guaranteeing trillions more. We now even know that Citigroup has 1.2 trillion dollars off book assets that it might be on the hook for, and that are mostly bad debts which is of course an unknown in all these equations. Add these to the credit default swaps - the hidden WMD- which were supposed to be mortage insurance contract that speculators bought against these bad debts for a penny and hope to reap billions in rewards as they go under: of course who will pay is a whole other story as no one expects these dead banks to step up to take care of those obligations.
Of course, not to mention an auto industry that is going under, and the magnitude of the mess these disastrous eight years of republican misrule begins to get clearer...one dominated by ideological conveniences instead of pragmatism...the same ideology that made them let Lehman go under but reversed course as soon as the dire consequences became clear. The same ideology that is not making them outright nationalize the big banks for which $125 billion have been used to buy equities the market is valuing at less than $40bn today. Makes no sense...
What makes sense is:
1. A mechanism to immediately invalidate credit default swap (CDS) contracts- see below: (I didn't originate the idea), effectively recognizing that these were speculative instruments that were traded in  unregulated markets at buyer's risk. The loss of capital by these buyers estimated at mere millions is more tolerable than the billion dollar havoc their WMDs is wrecking on the market.
2. An immediate requirement that banks transfer off book assets - known as SIVs - not currently acounted for on balance sheets into a specially created government entity. This transfer should have net zero balance sheet impact, but force the banks to forego the future profits from such assets when they recover.
3. An immediate requirement that banks that drew government funds in the current TARP fund offer some form of mortgage modification program as supervised by FDIC to ALL homeowners that request for one. The homeowners are the taxpayers and they deserve a break too if they are bearing the risks of all these banks - bad decisions. Until the homeowners, who also double as the tax payer, are helped- then the assets now owned by the government on behalf of the tax payers will not recover. Hence, it is in everybody's interest that the homeowners are helped, and that the ridiculous return projections on these securities are moderated with the reality of slowing income, and tighter purses going forward.
4. A moratorium on dividend payments by all financial insitutions that have gotten any form of government assistance in the past two years- and for the next three years forward.
5. Immediate legislation to fix the remuneration of all CEOs in the financial and auto industries as a multiple of the lowest paid staff on the payroll...contract or direct hire. The lowest paid staff should effectively be somewhat paid close to the minimum wage- but this is an indirect correlation that should help lift the tide of the poorest class in the future.
6. Investigation of all past decision makers for fraud and greed...and a moral pressure on CEOs and executives to return obsene remuneration earned in the past 8 years,..a name and shame campaign spearheaded by law makers and the media will help.
7. And last but not the least- in fact the most important- an immediate application of the trust busting laws of Teddy Roosevelt to break up any institution that was helped because they were deemed too big to fail. First on my list will be Citigroup and AIG.
--
SOURCE

Another big idea is to resolve the CDS issue. Credit default swaps total trillions in value, and in many cases the contracts were purchased not as genuine insurance (by the holder of a bond) but as a speculative investment that will pay off if the bond defaults.

Whalen calls for a mandatory unwinding of these contracts, in which purchasers who were genuinely hedging a risk would be covered, while speculators would lose much of their potential gains from the investment.

Without some action along that line, CDS obligations could become a black hole for the banking system, he and others warn.

"These things are like land mines," says Michael Greenberger, a former regulator of derivative contracts at theCommodity Futures Trading Commission. "Every indication is that they are at the heart of the financial crisis."

He says a first step is to take an inventory of CDS contracts, since poor regulation makes this market opaque.

He also says it may be necessary to push speculators to take a hit on the value of their contracts. This might be in their interest, he says, since the companies offering the contracts might not survive if they must pay the full amount

Posted by DonCasiragi at 10:42 PM No comments: 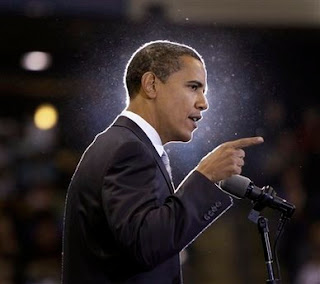 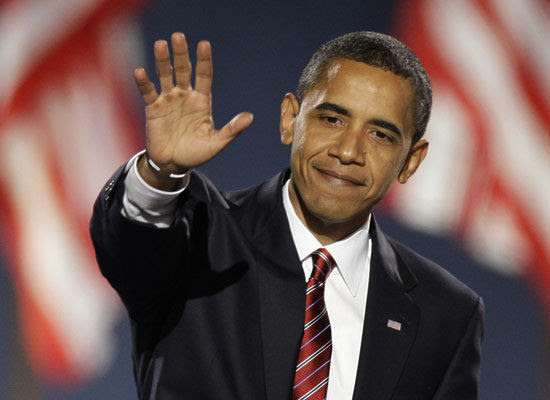 "Power, Joy, Grief And Fatigue, All In One Whole Person"
When Obama took the stage, we saw a man embodying a complex array of feeling. This is a key to his personality -- it takes enormous strength to let your vulnerabilities be so readily seen.
Posted by DonCasiragi at 6:13 AM No comments: