Those who terrorize the innocent, do so because they are hopeless. Hope strenghtens the spirit of man and emboldens our prospect for the future. For those without hope live without the assurance of tommorrow-: food, shelter or clean water, a great life for their children. Indeed at this special time we console the great people of London on the tragedy of terror, we implore them not to lose hope. The hope that the little help to the needy in the poorest part of the world, would make the world a lot safer for us in the future. In unision, we all condemn terrorism, in unison we should condemn poverty. Terror is aweful and should be expelled by all means possible from the world, including waging a determined war against poverty, injustice and bad government. We should all join hands together to make the world a better place for our children, our grandchildren and those who we do not know. It is our hope that God's children would be able to live an abundant life devoid of terror, hopelessness, poverty and disease. May you reading this piece pray for the children of the world that would go to bed hungry tonite..please pray to your pocket- donate to www.unicef.org
Posted by DonCasiragi at 6:17 PM 3 comments:

Singing the Song of a New Nigeria

While this appears to be a dream, I really hate to acknowledge it (as a fierce critic) the present administration in Nigeria are a lot better than their predecessors. No sleeping on our oars..all on board!
__
Obasanjo, in London, woos foreign investors
Vows to confront corrupt African leadersFrom Madu Onuorah, London

I saw the commentary of Kudlow the CNBC commenator on Africa's problem and was incensed by his ignorant attack on Nigeria Check out his comment (http://www.lkmp.blogspot.com/) and my rejoinder to him. This sort of comment deserves a reply and the sort of reply to teach Americans to do their research and that the world is not New York (Apology to my knowldgeable American friends)
Posted by DonCasiragi at 5:05 PM No comments:

Mother Africa!
Oh mother Africa!
Have you heard?
Have you not seen?
Will you ever feel?
Can you ever perceive?
Oh mother Africa,Ancient in age,Ageing in civilization.
The cradle of man,The origin of the sapiens,Wholesome in creation,Whole in incarnation.
Nature's endowment,Shall it ever depart?
The greenery, the waters,T
he vegetation,Beautiful to behold,
A land of contrast!Mother Africa,
A paradox in its own self! 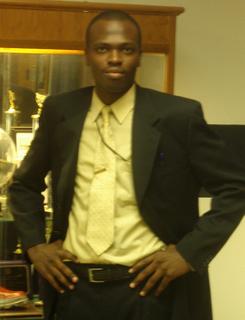 This is a very important page to me- now I can get my ideas on African socio-political issues faster out there. Any visitor is free to post and comment on my articles that would often be linked to dawodu.com where I am a regular writer. Sometimes original articles might appear on this blog and may be published on dawodu.com too. I would also share with you some of my poetic thoughts..it has been a while so I might not be off and running a little while- I am poetic rusty! Once again you are welcome to wazobia world- the world where 250 languages, type A character and the worlds most resilient people share and banter ideas on the development of a continent- Mother Africa.
Posted by DonCasiragi at 12:17 AM 1 comment: