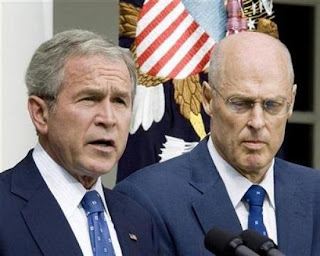 "I must tell you, there are those in the public debate who have said that we must act now. The last time I heard that, I was on a used-car lot," "The truth is, every time somebody tells you that you've got to do the deal right now, it usually means they're going to get the better part of the deal."
Rep. Mike Pence, R-Indiana.

The thrash for cash plan is rubbish- and I don't just mean figuratively, I mean literarily. It is Paulson trying to save his buddies. Makes no sense to me why he had Section 8 to deny oversight and even contained clauses for golden parachute! Mouthing stuff like free market when the plan is exactly a short circuit of free market is just trying to eat your cake and have it Paulson. The absence of the man on top- Bush that is- is even more befuddling. If it comes to thrashing political opponents and cowboy talk- one can count on Bush and Dick Cheney. But alas they are missing in action as Rome burnt. How can Paulson propose a plan that helps wall street, reward their bad behavior with no single clause on how to protect homeowners on main street who invariably are the ones paying for this package? Makes no sense to me unless you figure that this White House is one that is for the wealthy, powerful and well connected- they don't give a damn about main street. Never did; but somehow they sold main street a lie: "we are the guys you can drink beer with"!
But maybe times are changing. Once upon a time, Republicans mocked regulation and government spending--and the voters laughed along. But who's chuckling now? The collapse of investment banks, like the collapse in the mortgage securities market, was a by-product of insufficient regulation. Meanwhile, it's "old-fashioned" Democratic ideas like Social Security--a program Republicans have campaigned to privatize--that insulate senior citizens from drastic declines in the market. And government spending doesn't sound so awful if it means universal health insurance, which can reduce the threat of financial calamity for working families. Democrats have tried to shift the tax burden upward, so that the wealthy pay more of their growing largesse. After eight years of Bush tax cuts reversing that progress--and middle-class incomes stagnating--the case for making the tax code more progressive again is ironclad. I have never seen anytime in politics where the left and right seem to agree so much on regulating private business- it appears that after Enron (result of energy deregulation) and Lehman/AIG et al (result of financial deregulation)- regulation is no longer a swear word.
Again, it appears cash is forever king. The market intervention by the Feds via their cash for thrash plan is another reason for you to stay out of the market.You should not put your money in a market that is more closely correlated to unpredictable temperature in Washington DC and not the free wily nilly of demand and supply. The essence of free market is that you can make sense of the rules- which by the way suddenly became Paulson- the El Dorado of wallstreet bad behavior turn treasury secretary. Talk about the fox guarding the sheep pen
Speaking of cash on hand, it is not a coincidence that Japanese companies and Warren Buffet are the ones coming to the rescue of Morgan Stanley and Goldman Sachs respectively...as well as other wall street thrash collectors. It makes sense that the thrifty, disciplined and saving conscious Japanese economy and the oracle of Omaha are the saving grace of the flamboyant, living on credit wall street boys. Personal Lesson: Save, Save, Borrow less. The trade, credit and personal savings deficit of the US is a bigger threat than terrorism to the demise of this super power.
My Own Anti-Paulson Proposal - simple and straightforward:
- Banks literarily modify mortgages for first and second home owners at zero cost to homeowners ; removing balloon rates and correctly pricing payments to fit real income and actual housing value depreciation. Judicial oversight on bank and customer dealings should be provided by county/city/municipal courts.

- Real estate speculators are forced to declare bankruptcy i.e. those flippers or execute a short sale at bank own convenience. No oversight for this deal- so the bank is free to screw the speculators.

-Banks write down their losses due to modifications which affect the bundled CDOs that support such mortgages.

- Banks seek the Fed loan to cover these losses in return for tax payer equity in these entities in return for interest instead of capital. Equity balloons (just like the damn ARM they were peddling) into larger equity by the Fed if loan is not repaid within a set period. The upside for the banks here is that they are free to keep paying their ridiculous golden parachute-- it is just a loan anyway and the faster they can't pay , the more likelihood they going to loose their shirt to the Feds.

Me thinks my plan is fair, and right..it helps main street, punishes bad behavior (of Wall street and speculators), allows the economy escape a credit crunch by allowing the bad boys to remain liquid while creating a floor beneath the housing market and avoiding a situation where foreclosures & bankruptcies drive down the values of even the sane borrowers in the larger economy. My plan tackles the source of the problem- exotic loans to people who can otherwise afford conventional ones. It is high time the rich also contribute to the large welfare that they have absconded for too long under George Bush a la tax cuts and bail outs.

Here is a very interesting proposition on how an auction of distressed asset should work..from slate.

Posted by DonCasiragi at 8:54 AM 2 comments: