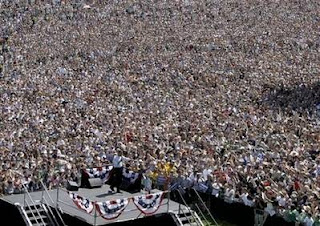 For the summer am settling on the following for my reading list: The History of the Yorubas by Samuel Johnson the rare book that documents the early history of the Yoruba people of Western Nigeria that I have longed to read, the Art of War by Sun Tzu a classic on military thoughts and strategy suggested for would be leaders, Nervous Conditions by Tsitsi D. suggested by DQ- thanks chica, Half of a Yellow Sun by the bright star of African literature C. Adichie, and Cronies a book on Texas, Oil, Bushes and Republican hypocrisy written by Robert Bryce. Last of the Pirates a book on the most dangerous mercenary of African Bush wars and a thumb thru of Barack's Audacity of Hope (hopefully b4 Denver) should keep me company on my numerous dash across the continent and the world this summer. The Mrs Club - Ekene Onu is only looking good. I have been lazying about with Bill Cosby's Come on People, and Freakonomics...those should come first. Can't wait. See ya on the flip side.
Posted by DonCasiragi at 8:38 PM 2 comments: