“I live his life and memories... in reverse?”

It is not many a time that you read a book and have a narrative. I am just entering from , on a fly by night vacation through the memorial day holiday weekend and true to the timeline coincidences I am just finishing off the last chapter of the first book of the presumptive democratic nominee: Dreams of My Father, by Barack Obama. Not many books I had read have been so marked with the bends, surprises- the emotions and the dips of a life so vast, so rich yet so complicated. Indeed, not so many authors could better describe and could better have lived it than the man that did. 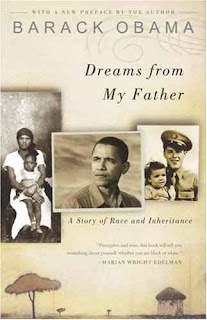 Speaking of timelines and experiences, I had bought the book after being thoroughly impressed by the now much acclaimed speech by Barack at the 2004 convention. His rising profile at the Senate as a shining star in the spring of 2005 spurred me on to make that purchase. The book lay fallow in my bulging library shelves much until later in the fall of 2006 when I was to make my first trip back home after I had left. There of course was also a personal story: one not verily as complicated as Barack’s, but in itself as personal and perhaps as memorable. Much of this personal story I will speak properly of in subsequent paragraphs. On my flight between Houston and I could only consume the first part of the book that dealt with his life in Hawaii and growing up pains of a young man lost between two worlds of racial struggle and a society unready for his like. This was before the agitation, hope and excitement of going home after six years seized me on my flight back between and . I abandoned the book hoping to pick it off soon after I got home to , Warri, or Ikole-Ekiti. But that was not going to be. Like hands full my family members are, the joys of those moments captured and the bonding that took place in the little time I spent with them snatched away those precious moments I could have used in thumbing through this piece of discovery. Not like I was complaining, my elder sister Dolapo whose wedding ceremony will take me back home this summer was readily available to scrounge the book away from me and squeeze the living daylight out of its pages in her familiar book wormy manner.

During this same period, Barack himself was ensconced somewhere in Hawaii contemplating a presidential run after the load of positive press the second book after the first, Audacity of Hope, had gotten. In my mind, I knew Barack was made for greater things but I was not too sure if his decision to get into the race that January was not one that came a little too early. But I was not someone to declare, hence I assumed the role of observer of the nomination as my blog roll from Spring 2007 to Fall reveals. In this same period, I fell in and out of the book. Reading his organizing years, inspired by his permutations on race and race relations but albeit hardly off the fence on his new found ambition. But sometime in November 2007, I became a convert. Something lighted up. In the eyes of the portraits of Martin Luther King and Nelson Mandela that hung on the wall that led to my room, I could read the clear unmistakable message: Hope, dream and do not fear. In the next months, I along with other Barackites will make millions of calls, I volunteered, organized and cheered our way to a narrow primary loss, but a caucus triumph by such a large margins he got the highest number of delegates out of and the biuggest margin in the county where I was precinct captain. In this period I had not been able to pick up the book to finish off the intriguing story of his years organizing on the South side of .

It was from the point I picked up the book as I departed for Seattle on the pacific North west for a memorial day vacation (post coming shortly) and it is even more befitting that I read the last lines of the book as we stopped over on our way back from Seattle to Houston at Denver. Yes, the same place where history will be made in August at the democratic convention. Everything about Barack and his book oozes fate and destiny. He is a man made for great things. The chapter I most thoroughly enjoyed was the Part 3 on his return to . In it we find a man whose colliding universe is realigned, one in which the magnanimity of his character and maturing of his mind bore out to his readers. In his entire writing his brilliance, introspection and thoughtfulness is shown in more ways than one. His forgiving, near heroic equanimity is also worthy of mention. Indeed that core abilities of leaders to be firm, yet being able to change their minds in the light of new evidence came out as the book went from that of struggle, loss, reinvention and finally discovery. The discovery of himself, his roots and his people. In all, he more than made up for it at the end.

As a personal story, I couldn’t have finished reading the book in a better time. Now that I once again go back to a country I left as a child, the book showed in our dual lives -what we left behind and the internal struggle we all live. One man, his family and his community. It is the heritage of journeymen that the father of BO lived; one with twist and turns that confounds the minds of those of his generation like my father who lived through it. Who like the senior Barack had a near melodramatic situation righted much earlier when my half brother came home in 2000 to discover a family, father and country he always heard but never saw. The difference being of course that the nearly perpetual story of distance to their children that marked the Obamas was a diametric opposite of my family where men showed their strength by bonding with their children. With their wives, now that is a whole different matter. I owe dad the book, so also my brother –Olu, whom I will see the second time this July as we give Dolapo away in marriage. Now I feel his pain, now I feel some sense of duty to show him everything he needs to see. The one I know and the ones I don’t: from to Odo-Oro Ekiti. The book in itself have now spurred a determination to now record my own family history- a video project I hope to accomplish in my three weeks at home in August. With Dad retiring, and everyone around it couldn’t be a better fitting time to get the roots to come all round. I hope you are all ready for the hard questions. Maybe I will share, maybe. In all, we all in some way lived the life of our fathers; perhaps in reverse. In as much as we share those genes, we carry with us the burdens of history, of heritage and the blessings (and perhaps curses) that comes with it. So long.

P.S: Happy Retirement Dad. You sure deserve it. You are retired but definitely not tired. Am loving Asa..enjoy!

Posted by DonCasiragi at 3:28 PM No comments: