I definitely think the Obama camp is making a strategic and perhaps tactical error in engaging McCain on the issue of Iraq. For this however I blame HRC. This shows the reason why she needs to throw in the towel now. His focus on the war is fighting on McCain's turf and can never be good for him. Moreover, he cannot use the same tactic he uses on HRC in the primaries to defeat McCain in the fall. The democratic base strong opposition to the war worked in his favor, but the general population is less inclined to look at the past than focus on what will be done going forward (check John Kerry's loss in 2004 to an unpopular president). It is obvious the McCain/Republican strategy going forward is to:

A. Define Obama and drive up his negativity by framing him as unpatriotic and weak on defense. For the unpatriotic charge it appears McCain is currently reticent but I expect him to seize on it as soon as he is 10 points down in the poll like HRC is seizing on the Islamic stereotype now.

B. Frame the war in terms of national security and pride while pretending the economy don't exist. This is a strategy that relies on McCain's strength/

To win, Obama must however do the following to counter (I suspect the smart people around him already know some of these points, but a need for consistency of message is making them fight off HRC and McCain for now with same judgment vs. experience tactic that have been very successful in the primary but whose efficacy I doubt in the General Elections)

1. The war is the Economy Stupid! : Obama should inevitably tie the war to the economy. He should remind people the inevitable connection between a war bleeding $12b a month and their mortgage, rising gas cost etc. He should even claim the price of oil will come down dramatically if the crisis in the middle east is not encouraged by US involvement in the war. He should ask McCain for his plan to fix the mortgage crisis, cut energy costs, fix healthcare etc. He should use McCain's word that he knows nothing about the economy against him, and tell America we need a domestic president that knows and understands America needs. We need a man who can be president of the USA first before being the president of the world…read, National Pride.

2. Define McCain as a Liberal, Wasteful Spender on War: There is no better place to get a bad McCain definition than from the right. The right already labeled McCain a liberal, and Obama should seize on it. He should label McCain a tax, war and spend liberal. He should define him as a deficit spending, fiscal undisciplined liberal. A simple question will do: " how does McCain intend to finance his 100 years war?" McCain will stumble on this point. Then Obama people should answer it for him: borrow from China, and Saudi Arabia one of the world's biggest sponsor of Islamist groups. This will alienate McCain from his base that cannot stand him already and the center that is looking for an alternative

3. Corruption and Ethics: McCain thinks this is his strong suit, but I think not. Remind America of the Keating Five affair; remind America of his close associations with lobbyists running his campaign; pin point the corporate jets and even show his hypocritical stance on campaign finance reform. Frame him as old corrupt Washingtonian versus good young guy from the Midwest. McCain will bristle and will lose his cool: That is where you want him.

4. Inconsistency: McCain camp calls him a maverick. Part of the downside of this label, is its remarkable lack of consistency and contradictions. The Obama camp must exploit this. Call him irresolute on the issues. Tag him flip-flopper. Question his conviction and character. Use the issues of tax cut he first opposed and supported (just to win the primary), the gay marriage he first supported and then opposed (to win over the right). McCain will again bristle at this point because he doesn't take kindly to being called out for whom he is truly is- But that is where you want him.

For it to work, these four labels have to be used consistently across board: Ignorant of the economy, tax and war liberal, corrupt old guard and inconsistent flip-flopper

Posted by DonCasiragi at 11:15 PM No comments: 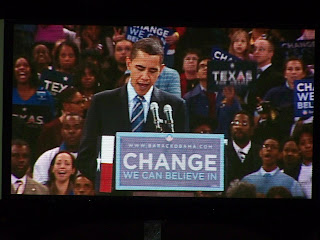 Just back from the rally; terrific or in Houston manner- tworiffic! What a night. Obama was vintage and the crowd's energy was infectious.

Posted by DonCasiragi at 10:38 PM No comments: 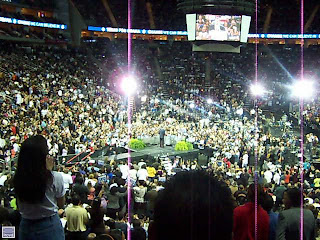 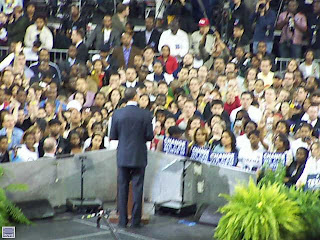 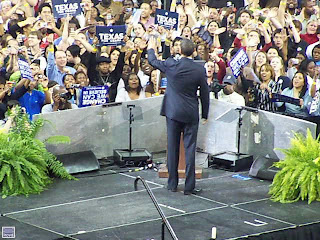 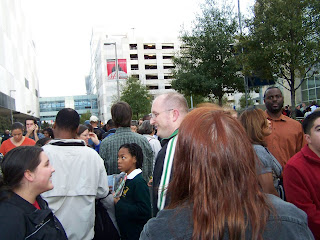 Posted by DonCasiragi at 10:34 PM No comments: 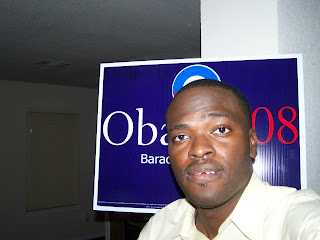 I am tired and hungry, yet am excited. I am just back from a meeting. It is rainy outside, yet so many young people, old and of different races cuddled in downtown Houston for one singular reason. Organizing for whom we think is the best candidate for office of United States President. Barack Obama that is. I have come a long way trust me. I have a long way from my initial doubts, to my journey in the fall when surrendering to the fustrations that Barack was not hitting back and inspiring the way he should. November was a turning point for me though. After countless hedging and doubts, it has become abundantly clear that Barack Obama is the man of the moment. He is the best man for the job. He is my vote for the future- a brighter future.

To be clear, Hillary is a good candidate- but she is nothing near great. Policy wonks are fine, but that is why we have cabinet positions. Beyond her electability, we need someone in office who can unite not divide. While there might be small differences between her and Barack, it will amount to making a mountain out of a mole hill if I make those distinctions. These differences pale when you consider that it is okay to have policy, but it ultimately begs the question if you cannot get it done because of partisanship - the same that have bred the misgovernance of the past eight years. In the words of Representative David R. Obey of Wisconsin, chairman of the House Appropriations Committee who is respected on Capitol Hill as one of the small share of lawmakers who has intricate familiarity with the federal budget, said he was more than comfortable with Mr. Obama’s grasp of substance.“If I weren’t, I wouldn’t have endorsed him,” Mr. Obey said Saturday. “You can’t make much headway on substance until you have somebody who can break through the rancorous atmosphere, build new alliances and cut through old barriers.

Hillary says she is fighter- well I give it to her she can fight. But this is the Presidency of the most powerful country in the world not the WWF. Hillary says she is experienced, well I agree with her- but some experiences just don't count. Such bad experience like sending the troops to a phantom war, voting for bankruptcy bill do count when it matters the most. Barack is capable of moving us beyond the old paradigm and getting the job done. Hillary will depress the democratic vote in November, and energize the republican one- with scary McCain on the ticket. Whatever happened to the straight talk express? I guess it had engine trouble!

I look forward to winning Texas for my man, and that is why I signed up as precinct captain. All roads should lead to my house next Saturday- I am hosting a Pre-Primary House Party. Watch this Space. It is us- the little people- edging our $25 for this no name candidate, the underdog, meeting in cold nights against all odds that the establishment should be afraid of. Whoever says we can't? YES WE CAN!

Dance Into the Light by Phil Collins best expresses it- I am going back to East Africa! 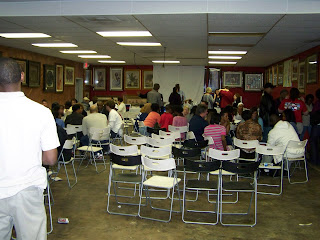 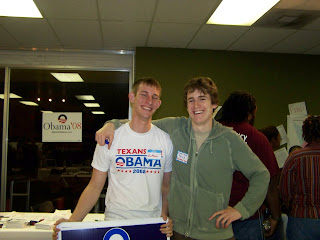 Change We Can Believe In! Volunteers for OFA
Posted by DonCasiragi at 9:34 PM No comments:

Whether in the West - in inner city ghettos or in African slums and poor sub Saharan African governments, I am absolutely convince that welfare, aid and handouts is destructive to the longterm well being of the poor. In America it promotes laziness and satisfaction with the status quo- a tokenism, in Africa it is an effective way to short change the poor and keep them poor while exploiting their resources and corrupting their leadership. Instead of two bags of rice from Iowa to Niger, give the farmer in Niamey a functional government, a reliable irrigation infrastructure and teach him goof famine skills so that this famine will be the last he and his community will ever see again. Need breeds innovation & invention; welfarism breeds laziness & poverty. This documentary below proves it!

The Great African Scandal
Academic Robert Beckford visits Ghana to investigate the hidden costs of rice, chocolate and gold and why, 50 years after independence, a country so rich in natural resources is one of the poorest in the world. He discovers child labourers farming cocoa instead of attending school and asks if the activities of multinationals, the World Bank and International

Posted by DonCasiragi at 11:34 PM No comments: