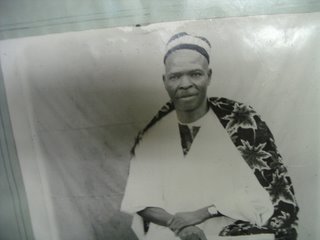 Born sometimes around 1905 in the scenic Hills of Iragba Community, in Odo-Oro Ekiti in Egbeoba Kingdom of Ikole Local Government of Ekiti State, Nigeria; Chief Michael Oluwagbemi I, the immediate past Elejofi of Odo Oro lived a good life . An hardworker by all accounts (including one that said he cultivated several acres for himself during a planting season and went ahead to do the same for his younger brother). One of five children of his mother and a father (whom he hardly talked about), he was a born leader throughout his lifetime until he passed to the great beyond in November 1995.
Grandfather worked very hard; once Osomolo (trader) with more than 5 apprentices whom dad grew up to know. He used to travel to Ibadan by feet to buy materials in the 1930s. Earlier, he was a labourer in Ile-Ife farms where he became a catholic, baptised in 1928 as Michael. He later dropped Osomolo in 1952 or so and concentrated on tobacco farming the proceed of which he used to build his upstairs: still a regal old fashioned mansion that sits atop a rising crest in Ikole today. One of the best in the town in early 1950s and still by far the most structurally sound older buildings in the area today. From the proceeds of his farming he trained his thirteen chidlren through primary and secondary education. He was a devout Catholic, business man, community leader and great family man.
A good father by all accounts, the only cross in his life was losing many children in infant which forced him to be a polygamist. A very successful and professional polygamist indeed who knew all the tricks according to my father. He later went to devote his entire life to grow cocoa which he used to train all his 13 children. Grandfather albeit was successful and respected: a man known for his generosity (sometimes called foolishly generous by dad) and great courage (speaks truth to power). He was a man of high integrity and discipline. He laid a good legacy passed down to my father: which I am following. Indeed, when people ask me today why I call myself Michael II (or if it is my "real name"), I am always quick to flaunt that I was named after Grand Pa, to whom I bear striking resemblance. Tall, cheerful and by every imagination handsome, Grand Pa left to our family a good name that I am proud of.
Thanks be to God for for his life. Baba rere ni baba wa! Sun re o! Adieu.
Posted by DonCasiragi at 1:06 PM