The problem with Emefiele is that he is majoring in minors. The real problem of Nigeria is not devaluation vs ostrich policy. Devaluation has already taken place- the act of sending medical bills to parallel market is an act of devaluation. The selling of official rate to Hajj and pilgrimage folks is an act of economic subsidy of unproductive activities. Hence the debate is a false one. The real solution is revaluation. 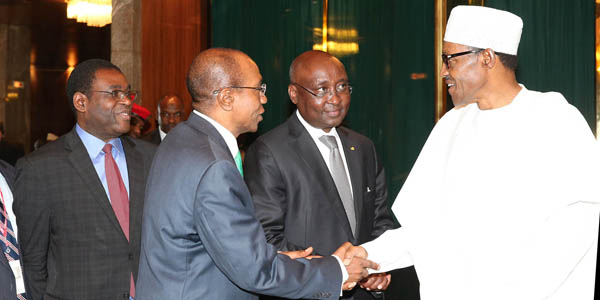 The mechanism of forex demand and supply of Nigeria today is faulty. Emefiele however lacks the intellectual depth or the boldness to address this salient fact. There is no real forex "market" in Nigeria, where 90% of supply is dominated by one player - the Central Bank. This should not be so. The solution to Nigeria's problem as such is simple - and this will actually lead to a single rate market, and that rate will neither be 200 nor 345. It will be somewhere in between and enable banks and industry to focus on what matters instead of the nonsense going on now- growing production instead of worrying about exchange rate .


This solution is in constitution. All consolidated revenue should be distributed to all constituent bodies in the manner in which they were received. If they were received in dollar, yen, pounds et al- they should be distributed in that manner. This frees the CBN from the headache of being the sole market maker. Dollar and other currencies will be in the hands of 37-800 players who can trade it for naira or not with banks whom they will bank with who won't in turn distinguish these deposits or inflow different from normal exporters as it were and will be able to then stimulate a true forex market free from Emefiele fiat and market distorting nonsense. This is the structural solution that a compromised nonetheless intellectually Lilliputian CBN governor can never provide. You can't give what you don't have. Emefiele reflects the president that chose him.


PS: As I said earlier the independence of central banks was enshrined in central banking doctrine in the 1900s based on the reality that given the tough monetary decisions necessary to maintain a balanced economy, politicians should not drive both fiscal and monetary policy. In fact, it is in their interest to be insulated from it. Emefiele however has exposed the President by his inability to be independent because he is criminally exposed. The tail is now wagging the dog!


The only group benefitting from the current Emefiele Regime of fire brigade and jujitsu management of our monetary policy are the banks. Already denied the easy money of fixing government money via TSA with implicit carried interest of 8-25%, Emefiele have provided his buddies almost a 80% carried interest in Forex. I have friends that work in the industry and they confirm this. The forex policy have negated the potential effect of TSA which would have forced banks to lend to the real sector to stay in business. Now it is only their treasury department that are working- churning dollars supposedly allocated to manufacturers to round tripping - with no positive impact on the economy but their wallets. Nigerians need pitch forks and knives to deal with Emefiele and his band of bandit bankers!

The President and His Budget

The President should please start over, by assuming the first step in reorganizing the government was cutting down ministries Vis his newly appointed ministers to 24. Now ask the ministers to set the agenda, look through their ministries for who can implement it among current staff, examine existing agencies and parastatals and examine their viability and sustainability - recommend the ones to stay, go or merge, and then prepare a budget to fit the mission and the staffing.  Where staff are redundant by the exercise, launch a national retraining and redeployment program with part of the savings to not only engage them but boost the economy Vis investments, cooperatives and entrepreneurship. On the national level introduce serious ICT policy and shared services  mentality in ICT, Facilities and Building use by MDAs and vehicle use to cut cost.  Also constitute the NATIONAL PROCUREMENT COUNCIL and enforce uniform & sensible pricing and standards. A deep look at our foreign missions and if we need that many must also be undertaken . Time to tighten our belt!
Posted by DonCasiragi at 10:25 AM