If anything, the continuos and often contradictory analysis of the ill-fated Malaysian Airline flight must be gut wrenching for the families and friends of those on board. The analysis by the different bubble heads, as well as the gale of misinformation and incompetence of the Malaysia and Chinese authorities with false hopes raised first around Oil Slicks, reported sightings of fire by oil rig men, and later the misplaced sign off by the co-pilot in the timeline by authorities, and now two debris findings in South Indian Ocean that have come up with nothing. Even the pings to the satellite and radar sightings have been totally mashed up, it is hard to know what to believe these days! This must be hard. Two questions are outstanding about MH-370. Where is the plane? What happened to it? The first question can only resolved by search- which is going on extensively as we speak. But just like Titanic, this may take forever and the black box may never be found. So now, is the time to start asking the second question: what happened to MH-370?

In the midst of all these, anecdotal evidence including two missing passports used on the flight, pilot attending opposition trial, key stroke used to divert the plane and the transponders being shut down have led many including the government of Malaysia to jump into very wild conclusions - that anyone familiar with any form of investigation understands may be fatal in search of the truth. Your first guess, is usually a wrong one.

But as a student of science, we understand the difference between emotion, perception and logic. It is as such important to try to identify what the facts, and try to deduce improbable events (eliminate those), and probable ones (investigate those). See these web pages for reference - ONE, TWO, THREE, FOUR


Note, I did not mention radar sightings and all- because those are not definitive facts but probable events

This leaves us with three possibilities: 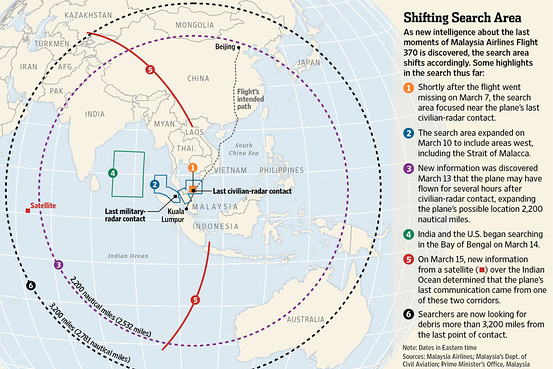 Addendum: Based on additional evidence, there is also a possibility the pilot was incapacitated by passenger (hijacker) intervention. This is a combination of two of the scenarios above, and will explain the multiple turns, and the plane was probably steered into the pacific  by someone not experienced as I doubt a pilot will make this false move- no statement made. This person could be the hijacker or someone that overpowers him.

There are few things we need to know to eliminate one or two of the above possibilities:
CONCLUSION: There you go- the world of clandestine secrets and inability to man-up to vulnerabilities is what is keeping this puzzle from getting resolved.

PS: I'm neither a trained pilot, flight engineer nor aviation expert. I have flown a flight simulator only once in my lifetime. However, I have a passion for flying and strategic thinking; flew 89 times last year alone, and on track to double that this year.  I'm intrigued by flying though, and hope one day to acquire a private pilot license. So, do not quote me or pass this one. These are musings of a logical mind- ONLY.
Posted by DonCasiragi at 3:08 PM